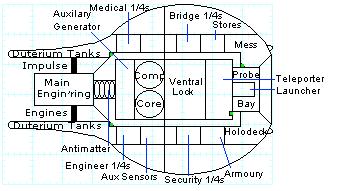 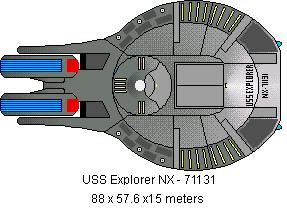 The Explorer class was first developed for the Dominion war, but was later redesigned, refited, and renamed for long range exploration. She was equiped with a number of prototype devices, one of which malfunctioned in testing on the prototype causing the death of most of it's crew in 2386. After it completed it’s refit on Stardate 51069.4 (a little behind schedule) it was returned into the command of Captain Ajax Glass, who had hand picked a diverse team for her crew. It was then invited to patrol (and explore) the far side of the Klingon territories. On Stardate 51357.6 it was refitted with a functional Klingon Trillithium warp core and reactivated several of it's experimental systems.